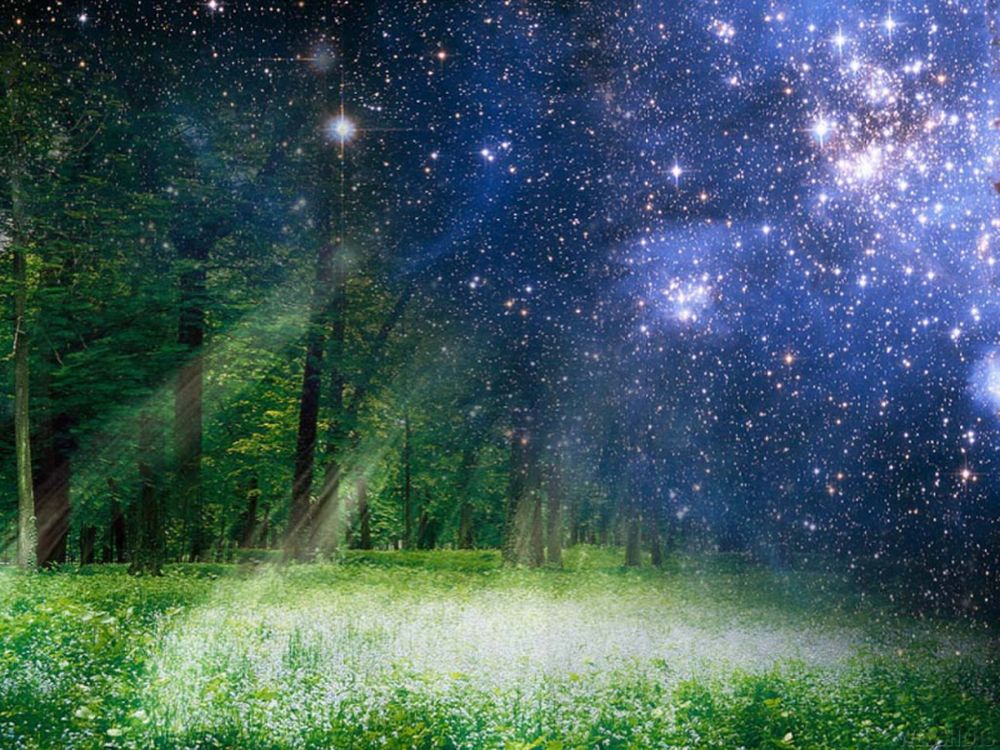 As the light of the sun reaches us here in our physical world, we see it as a bright light, but also know it is made up of many colours. It is no different to the nourishing light of Cosmos. As it comes down through the layers of vibratory resonance from higher to lower, it refracts into its different constituent vibrations. These we perceive as qualities, because the light of Cosmos is what nourishes consciousness, that life-awakening network of wisdom, experience and the yearning to evolve, that make up the qualities of our being.

The light of Cosmos stimulates different pathways according to the quality held in each resonance, and these are the key notes of evolution:  the key journeys to undertake to realise the fullness of conscious beingness. Just as you undertake different subjects at school,  which you then need to integrate as an adult to enable your exploration and effectiveness in your day and your life – it is the same on the evolutionary journey of a soul, a spirit, a planet, a star. You start within the embrace of one of the qualities of consciousness, then progress to others, and then eventually, depending upon your pathway, you may learn the full spectrum of the qualities in the nourishing light of Cosmos.

On Earth, we have two beings who are the primary holders of all the vibrations of Cosmic Love:  Buddha, and the Bodhisattva (also known as Christ). These are names that might bring up memories of past experiences, or of what you have learned in lives past about the physical incarnations of these beings. Realise that Gautama, who incarnated 2500 years ago in order to attain, and then bring the Buddha consciousness into his human consciousness and into the world, is a very different being in his role of Buddha of Earth. Just as it is for Christ. Maitreya overshadowed Jesus during his years of ministry, to bring the Christ consciousness into the world, but has a very different role as Bodhisattva of Earth.

Gautama, Maitreya and Jesus are great Masters of consciousness – but Gautama and Maitreya also hold the role of being Buddha and Bodhisattva of Earth respectively, and as such they radiate much more than their personal consciousness. They hold the multi-vibrational inflow from Cosmic Heart, and distribute it around our world through nature; into Earth directly at certain times of the year in collaboration with Earth herself; and into the vibrational qualities held by each of the Greater Hearts. In this way, the great inflow nourishes all life on its evolutionary path.

The role of Buddha of Earth is vast, and has little to do with the teachings created through his incarnation as Gautama. Those teachings, and subsequent teachers of Buddhism, have helped awaken many millions over the millennia since He was present upon Earth, and continue to stimulate and nourish those who strive for a conscious life. His role as Buddha of Earth, however, is to do with the evolution of the whole Earth and all her forms of life, not just some millions of humans, nor with Buddhism in its many humanised forms.

Buddha stands at the edge of the ring-pass-not of Earth, the auric boundary of her presence and conscious reach, and bridges that boundary to receive the inflow from Cosmic Heart. Many other beings assist, including great angels, both within and outside Earth’s ring-pass-not, and the Cosmic Mothers who nurture all life in the universe. The Earth herself is involved, through the one who has embodied within her consciousness, the Last Kumara. She will become known and named in the coming era, for she will become the next Buddha in the not too distant future.

However, it is the one who is the current Buddha of Earth upon whom rests the responsibility of guiding, deciding and metering the flow of Cosmic love into Earth’s being.

All conscious development needs guidance, for should you simply be taken in barely conscious form and held in the fullness of light, vibration, intention of a much greater consciousness, you would dissolve. If the consciousness you have developed does not have the clarity, the ability to expand to hold the greater light, and the ability to guide and direct that light, then you do not have the vibrational strength to be able to remain a conscious vehicle in the presence of that greater light, and you will simply become merged with it, and dissolve into it. This means that you would no longer grow in consciousness.

As the journey upon Earth for her (and all her life streams) is to enable conscious engagement with the greater light and love of Cosmos, and thus become a planet of heart, a great inflow of Cosmic love cannot be allowed until there are enough conscious pathways for that light to flow and merge into the body of the Earth. Therefore, the role of Buddha is immense, for the inflow and thus intent of Cosmic love must be tempered to balance all that is unfolding in the conscious realms of earthly life, such that evolution can proceed with the right nourishment. Buddha looks largely out from the ring-pass-not of Earth, to perceive the incoming loving intent from Cosmic Heart, and then in consultation with all the Greater Hearts and the Bodhisattva, determines how much flow may come in.

The role of the Bodhisattva, or Christ, is similarly of little resemblance to the life we know of through Jesus. That was a life to bring about the incarnation of a certain light of Cosmic love, to stimulate particular teachings for humanity (continued by other teachers since then), and to attain a certain alignment in deep physical consciousness for future work. In the role as Bodhisattva, Maitreya works closely with Buddha on this profound inflow of Cosmic love to Earth, but with the focus being upon its expression through all the Greater Hearts, and thus into Earth and humanity, for the sake of aiding the evolution of consciousness. Thus, this role is often seen as that of the Great Teacher.

Maitreya works closely with all Greater Hearts to manifest this loving inflow in accordance with Cosmic intent and Earth’s karma, and present all evolving life with opportunity and choice to learn and grow in consciousness. Thus, Maitreya looks more to the Earth, and is the guiding light for the evolution of love, which is the result of consciousness.

As this great Cosmic inflow passes through the ring-pass-not of Earth, into Earth’s denser realm, its singular brilliance refracts into multiple colours just as the sunlight does. Each of these constituent vibrations holds a core quality, and becomes a path of conscious learning. Each is held by a Greater Heart, who has developed the consciousness to be able to receive this great inflow from Cosmos, hold that intent within, and filter that intensity down into our earthly world of human consciousness such that we may apprehend and learn, and thus evolve. In our inner worlds, Earth looks like a wondrous sphere of many colours, as each of the Greater Hearts holds their resonance in the worlds of higher consciousness.

There are many more beings involved at every step in this descent of Cosmic love, but the primary flow is as described, and it is important to understand it because it gives depth to your conscious apprehension of the Great Change we are in.

As stated many times, Earth’s choice to become a planet of heart has been made, and the Cosmic inflow has increased accordingly. This unavoidably creates pressure in the earthly realms, as that energy seeks inflow and expression in our world. The pressure gives opportunities for rapid spiritual growth, if you are open to that. It also creates fractures in those conscious enough to know there is choice, but who say ‘no’ – such as certain leaders who choose death and destruction whether through war, climate change denial, or other forms of materially-focussed greed and self-centredness.

For many, the extra pressure is felt as change in the outer world, with not so much pressure for inner conscious change; and many will simply flow along in the aura of others who guide in one way or another. But, if you perceive the change, if you feel nudged to learn and awaken something else inside yourself, or if you perceive a need for something more, then you are one of those being called to respond.

Even though the Buddha, the Christ and the Greater Hearts, with all their helpers, hold and bring this flow of Cosmic Heart into Earth so that all may grow in that light, it is not their role to incarnate it into the physical world we inhabit as humans. That is our role, those of us who hear the call, feel the pressure of the Great Change, and know there is more to be done for love and light to become manifest in our world.

There are enough of humanity with enough consciousness to be able to align with, and let through this greater inflow of Cosmic love, but it takes awareness, choice, and action.

Do what you are called to do with more love, knowing you are in this greater stream of consciousness-changing life force. Choose what you do, with Earth and our collective future in mind. You do not need to think intensely about which Greater Heart’s embrace you are in; or the deeper inner truths of your journey, to be a conscious and cooperative vehicle for Cosmic love, filtered down to your level of consciousness through all these great hearts, so that it may live through you and give the gift of loving light to Earth and all.