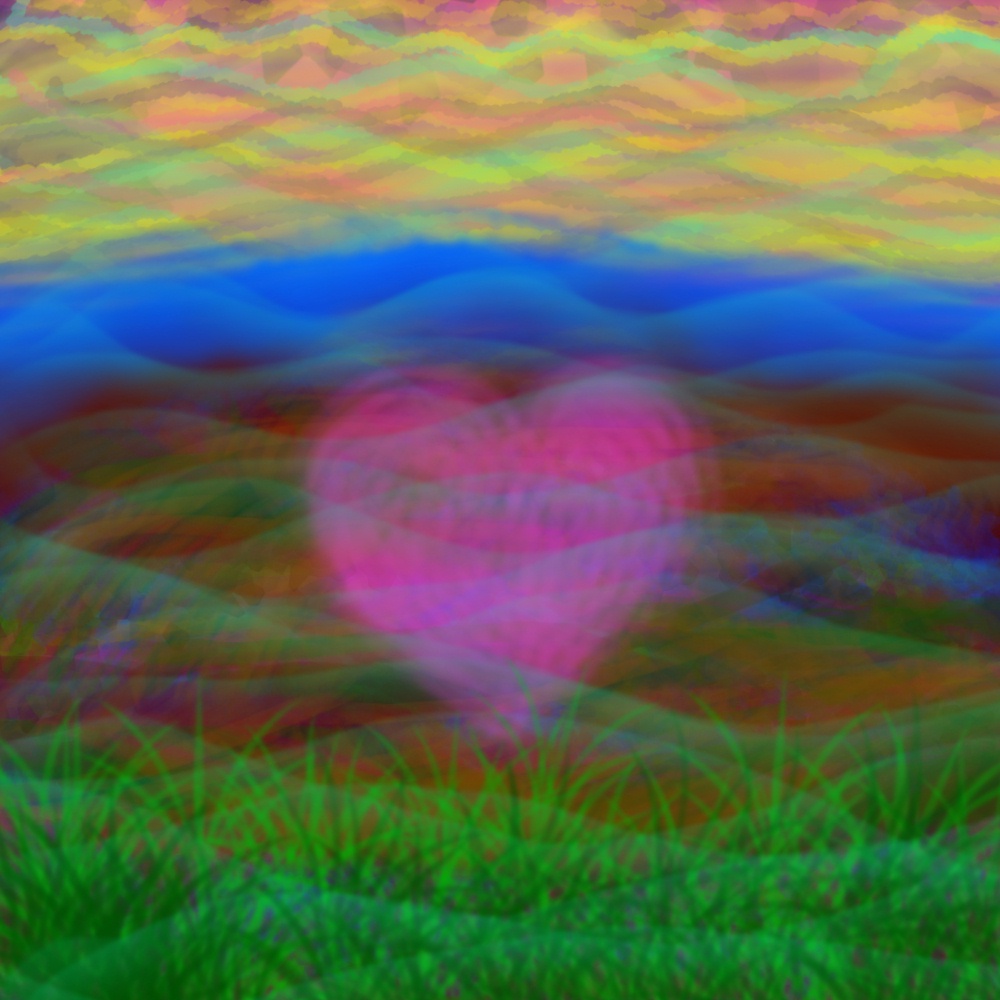 The yearning for soul, whether you experience that as the yearning for a higher love to embrace you in times of need, or for illumination in times of uncertainty or doubt, or for healing in times of challenge, or for meaning and purpose in life’s journey – this yearning is born out of the Law of Attraction.

It is the Law of Attraction that enables us to work with the involutionary forces and to build a body of human existence and incarnate. But equally, it is what constantly pulls our hearts to that deeper, higher yearning that leads us on the fullness of the conscious journey of evolution.

On the journey of involution, the descent into matter, the forces of attraction are garnered by those nourishing and deeply focussed beings that build form in these dense levels of Cosmos that Earth embodies.

In its most basic expression, the forces of attraction are what we see at work in gravity:  the basic pull of matter to matter. But in order for a human soul to be influenced by this, it must have matter that resonates with the matter of Earth, so that this force can work. Remember, like attracts like; this is the inherent nature of every molecule and subatomic particle in our universe, because that is the life expression our universe embodies. All matter is created within, and imbued with this basic blueprint.

However, when you need to bring life from one level of resonance into a denser level, such as from soul (dwelling as it does in the Ocean of Love in the finer vibrating realms of earthly consciousness) down into the denser vibration of emotional, mental and physical substance, you need more than the inbuilt force of gravity – for these levels of substance are not resonant with each other.

Thus, the guiding beings are formed. In Earth’s situation, they form in response to her call, and through the supporting intent of Cosmos and its response, expressed in consciousness from Cosmic heart, are held within the energetic sphere of Sirius.

Consciousness is the one other force of Cosmos that is able to coalesce matter and resonance, and build intent into that creation. But in terms of the journey of soul into manifestation as a physical being:  when the soul is young, it does not have enough, if any, consciousness to build a human form in the worlds of matter. Highly developed souls who came to Earth in response to her call, can build their own vehicles for conscious expression as human beings, or angelic beings in some situations. Young souls, however, need assistance, and so the great involutionary builders came into being, to enable Earth’s choice to be an expression of loving intent in physical matter to be fulfilled.

To create and build in matter when the inherent forces of attraction are not activated, i.e., when there is not enough resonance between the level where the creative force arises, and the intended level of creation – for example, a soul creating a human life – this is an act of will. Will takes effort, rather than the natural process of coalescence that happens when resonance and the forces of attraction are able to build. Some of the greater souls who came in response to Earth’s call used this method in earlier days. They used their own will to incarnate, in alignment with Cosmic intent (which is a type of will).  But because this takes effort, there is a limitation on how often and how long that effort may be applied. As humanity is slowly learning (too slowly, in those who do not treat Earth with respect or value sustainability), Earth is a being of contained, and thus limited, resources. It is the same on the inner levels:  there is only so much will that can be embodied within her ring-pass-not.

The great involutionary builders are created and sustained by Earth’s will and the intent (will) of Cosmos. Their creation was energised for a period throughout which enough souls could incarnate, evolve, and become sufficiently developed that there was enough resonance developed between soul and earthly levels that the involutionary builders would no longer be needed. A soul could then choose to incarnate (in alignment with the Law of Karma that balances all expressions of consciousness), without needing the great conscious intent of these builders to constantly be involved. This has largely been achieved, and is the point at which we find ourselves at this time.

This is the evolutionary journey we are on:  to become a conscious flow from soul to human and back, such that Earth becomes that living pulse of love that the circulation of her Ocean of Love through her physical substance will achieve.

But we begin with involution, and here is where the great choice of our era arises. For, as mentioned, humanity and other physical life forms as a whole, have achieved enough resonance with the higher worlds to enable incarnation to continue, without the massive effort needed by the great builders created to fulfil involution’s intent. But the memory of that force that brought us into being is strong in some, especially for those lured by the human emotions of greed – for greed can only express in the manifestation of things in the physical world:  property, money, power. None of these have value to the soul.

So, if greed captures a person’s emotional motives, and it becomes strong enough to subvert the decisive mind, and hide the yearning heart, then that person may create such a strong intentional vibration in their being that the forces of involution resonate with them. With enough conscious development, yet with heart closed off by the intensity of emotional greed, this person becomes one who wields some of the forces of involution, motivated by their greed. We call this person a dark magician. The forces that should naturally draw us into balance between involution, the force for life’s creation, and evolution, the force impelling us to seek higher and more loving consciousness, are subverted by the distortions and cementations of an overly greedy and inhumane emotional self.

Rarely does this occur, for the Law of Karma is there to create opportunities for, and at times to force, a person to re-take lessons and evolve the consciousness to choose more wisely, and heal and purify the greed they have strengthened in their human self.

However, you cannot evolve consciousness without choice, so there is always an element of risk on this path of evolutionary growth – risk of making dark choices.

Two great periods have arisen upon Earth where that choice has been magnified beyond an individual, when whole populations and civilisations have made consecutive and increasingly dominant choices, succumbing to the lure of greed over communal equity and shared evolutionary care. One was on Atlantis, where, as human myth and reality in the Akashic records states, the continent and civilisation were broken apart. This was the first great intervention, and was an act of Cosmic will, brought into manifestation by the hearts of those of greater consciousness, who are the guardians of Earth’s evolutionary path. These are the Kumaras, and in particular, Sanat Kumara, who has held Earth’s evolutionary intent within his consciousness since he came from Venus many millions of years ago to fulfil this role.

When the forces of involution, which are established through the effort of Cosmic will, are bent to human greed in manifestation, it can only be an act of Cosmic will that can rebalance this, brought into focused action by an embodied heart within Earth’s sphere of consciousness.

The second great period of the challenge of greed, and the need for careful choice, is now. This last (approximately) 150 years has manifested much harm to humanity, Earth and all her life streams, as a result of an increasingly coherent force of greed, that is pulling into action the forces of involution.

You may wonder, where are the great builders who wield these forces for human and soul, and Earth’s journey of consciousness? Can they not control these forces, so that they are not misused? These great builders were created by the will, to bring souls into incarnation. Outside of this, they have no role; for that is not their evolutionary journey. Humanity has to make the choice, individually and collectively, and then that combined intent can become the force that uncouples the massed coherence of greed from the will and intent of involution upon our planet.

We all experience wants beyond our needs. That is an aspect of our emotional nature that seeks attachment with the world around us. But this creates the fertile ground upon which choice becomes conscious, and evolution occurs.

The great choice and the Great Change of our times requires this personal choice to be magnified through alignment with the force of attraction that is within our hearts, drawing us to the light and love of soul. It is not enough to simply make a human choice at this critical time, for that does not create enough wilful intention of evolutionary force to break through the layers of greed that enshroud Earth and life at this time.

We need the intervention of greater forces. If enough human beings, the vehicle of the majority of conscious choice in our earthly world, yearn for this positive change for the sake of all life and Earth herself, then the Greater Hearts can respond. This is the first stage, where the call and response are enabled by the Law of Attraction:  enough human heart-felt yearning can attract the forces of love from these Greater Hearts.

That may be enough. Those who remember, or resonate with the memory of Atlantis, hope so.

If it is not enough, then divine will shall intervene, this time through the great female Kumara who is preparing to embody for Earth’s next great evolutionary step:  to embody heart. If humanity’s call is not great enough to enable the forces of attraction to undo the manifesting evil in our current era, then the Greater Hearts will themselves unite and call for this Cosmic intervention, and the emerging Kumara will have to take upon herself the wielding of this great force of will, to shatter evil.

Let us not get to this point, not only for the sake of Earth and humanity, and all life which would be strongly affected, but because it dilutes the importance of this moment of evolutionary choice, and thus the opportunity of the great step forward that can be made upon the conscious journey for every soul upon Earth, and for Earth herself.

Follow the yearning in your heart, temper any sense of greed in your being, and pray, meditate, attune in whatever way you can to magnify your heart’s call for peace, and for dissipation of the excesses of greed manifesting in obscene wealth, nationalistic oppression, unfettered political power, and the brutal destruction of people nature, nations and Earth.

The time is now. The call from a million conscious hearts could be enough, if personal will is applied, and clear choices made.

So, do yours. It is urgent.